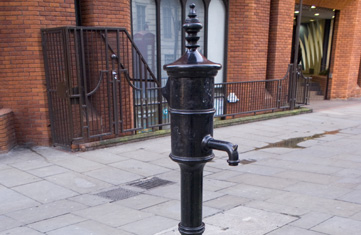 During the middle of the 19th century, London had a serious problem with its sewage and waste. The city was experiencing an explosion in population thanks to the Industrial Revolution, and the infrastructure was beginning to feel it. The London sewer system had, in fact, never reached Soho by that point. Those who lived in homes dug cesspits below their floorboards, covering them with large stones. Those who lived on the streets, or in domiciles, simply carried their waste to the river and tossed it in.

It was the Thames River dumping that contaminated the supply of water for the Soho district, and led to an outbreak of cholera in August of 1854. The Soho outbreak was devastating, noted by John Snow to be one of the most terrible in history. Historic records indicate that cholera killed nearly 13% of the Soho District’s population.

Historically, that’s a drop in the bucket but the importance of this event is in how the outbreak was discovered. Through investigation, physician John Snow discovered that a public drinking well had been dug not far from an old cesspit.

He challenged standing theories regarding foul odors as the cause of the disease, and eliminated possible causes by investigating the sources. His discovery completely changed the London sewer system for years to come, but it did not do away with the miasma, or “foul odor”, theory.

Unfortunately, Snow’s dogged pursuit of the truth would not be accepted as scientific theory until a century later.